Biggest Carbon Loser: Staying grounded, cutting carbon, when you have the travel bug

Three contestants. Two months. One planet. A lot of carbon.

What will it take our contestants, and our region, to kick the carbon habit and help fend off climate catastrophe? Many may try, but only one will take the coveted title: The Biggest Carbon Loser.

For the past couple weeks, three contestants in KUOW's Biggest Carbon Loser contest have been keeping track of their carbon footprint. They haven't changed their routines and habits, and therefore have been establishing a baseline for how much carbon their lives produce.

Why a contest for the Biggest Carbon Loser?

For one contestant, Will Wilson, routine means traveling. The 23 year old works in Expedia's marketing department and sometimes travels for work. But Will generally gets anxious if he stays put too long. He has to leave his Ballard apartment behind and jet off to a new place.

For example, this is what Will's life looked like last year.

“Spent New Years in Iceland," he said. "From there we traveled to Amsterdam, flew to Barcelona, lived there for three months. But during that time I traveled to Rome, to Switzerland, to France, to Germany, to Portugal…” 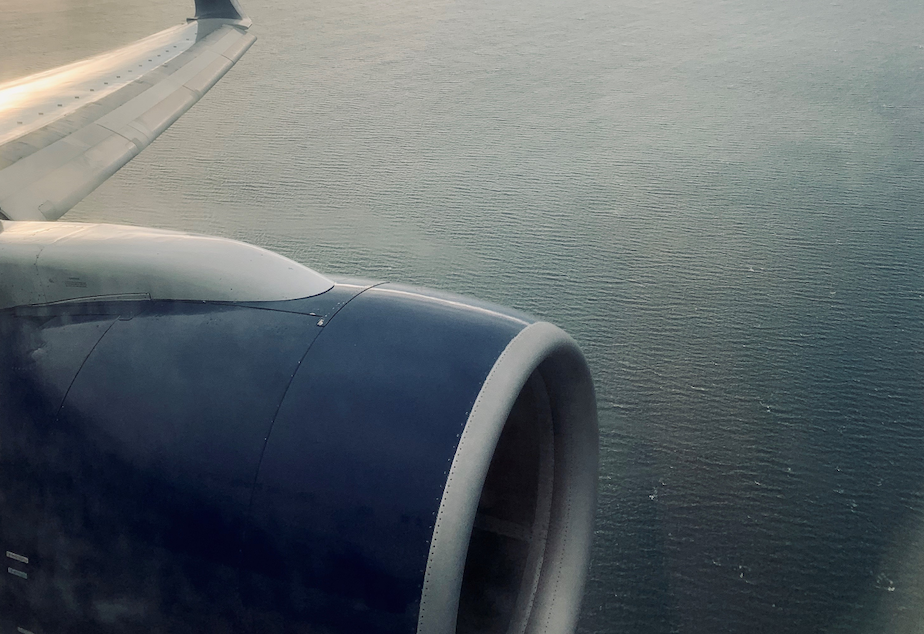 From my seat looking out at the 90 KG of carbon I am releasing per hour by traveling by air yesterday morning on my way to New York. Traveling for work isn’t always optional so it will be a challenge to reducing emissions in this way. Something I am looking to do is be more efficient in the way I travel for leisure. Will Wilson
Credit: Will Wilson

As KUOW Reporter John Ryan points out, exhaust from air travel is a major concern when it comes to Will's carbon footprint. Car exhaust near the ground can contribute to warming the planet. But plane exhaust, way up in the sky, can contribute twice as much heat, Ryan says. And cars have options -- hybrid or electric models. Those options don't yet exist for airplanes. The alternative is to simply fly less.

H﻿ow can Will satisfy his travel bug while cutting down on carbon?

“Limiting those longer trips and enjoying what we have here in Washington,” Will said.

Or perhaps taking a short train or bus ride to Northwest destinations, such as Vancouver BC.

Travel is going to be Will's biggest challenge. And with his birthday coming up, it's going to be a test for him to not fly off.

Will is just one of three contestants. Read about them here and the challenges they face in their pursuit to become the Biggest Carbon Loser.