Hey Seattle, here's the one thing our panelists would hoard for the snowstorm

On Week In Review, our smart panelists suggest you cancel weekend plans, stay home, and ride it out. We got this, Seattle!

Bill Radke discusses how Seattleites are handling the heaps of snow (and ice!) this week alongside panelists Luke Burbank, host of Live Wire and the podcast Too Beautiful To Live, Joni Balter, host of Civic Cocktail on Seattle Channel, and C.R. Douglas, political analyst for Q13.

Week In Review panelists discuss the snowstorm in Seattle on February 8, 2019

This is an excerpt from Week In Review. Listen to the full hour here. 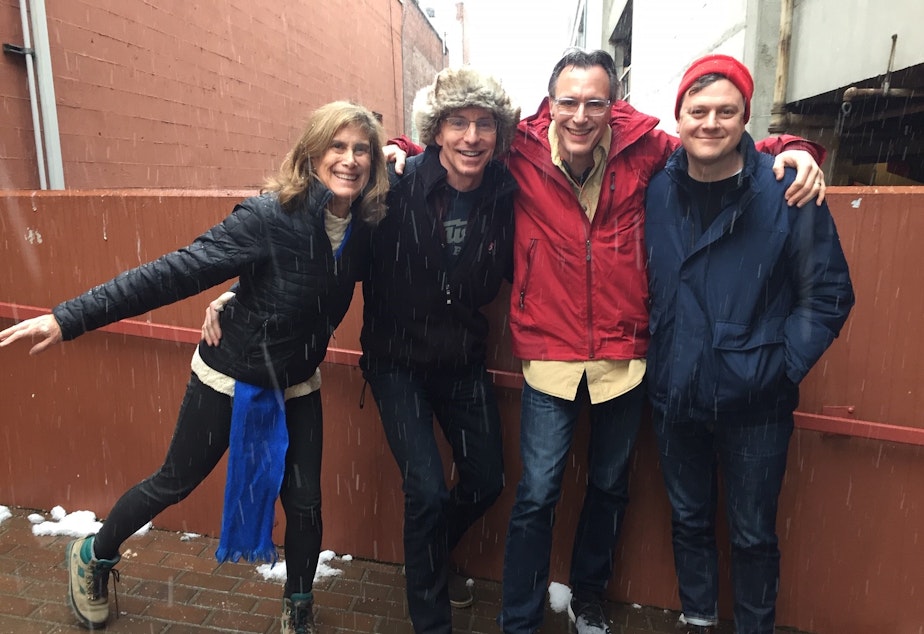 ...the greatest joy in life is when you want to cancel plans and then the other person cancels the plans first. I mean, that's really why we're on this planet, for that moment. This is sort of like that experience spread out to a whole region." –Luke Burbank
Credit: KUOW Photo/ Kara McDermott

Transcript has been lightly edited for length and clarity

Bill Radke: Luke, you came here from from SeaTac Airport out this morning.

Luke Burbank: I flew in from Portland really early this morning and it was a real delight sitting on the runway for what felt like hours because they were icing down all of the planes before they could take off...

Burbank: Yeah. You don't want to mix that up because it has a really negative impact if you if you screw that one up.

Burbank: The looks in the eyes of the people waiting in line was something I'll never forget. I guess they canceled like 150 or so flights. Some of those people were going to get through security to learn that their flight had been canceled.

Radke: I heard that the lines are crazy and I thought – have we become that affluent that our response to a coming snowstorm is to buy airplane tickets and get out of town?

Burbank: The guy driving the rental car shuttle said everyone had changed their flights to try to get ahead, and I think there was a lot of people who work for the SeaTac Enterprise that couldn't get there because of concerns about the weather, so you had kind of a, as you say, 'perfect storm.'

Radke: Indeed. Imagine it was government shutdown week at the same time... and I guess grocery stores are similar?

C.R. Douglas: The pre-storm traffic at Costco was crazy just an hour ago. I was trying to get gas and made the mistake of thinking I was gonna be ahead of the crowd and wasn't. So I started to go into the Costco and and 20 minutes later, not with gas, I got out the other side.

Radke: Seattle P.I. says Fred Meyer shoppers describe a 'war zone' of combat shopping. Really? Because people are buying things? I think don't shop before a blizzard if you have a pantry. The blizzard is the time when you get to go deep into your – who knows what's back there – now you have to to get into the black olives and the grits.

Burbank: Yeah! Stop reading Little House on the Prairie and live it! What's in the larder? Aww!

Radke: Yes! I can heat up some diced tomatoes and there's some spices. Why would I want to shop ahead and then eat the same stuff I always eat? It's a blizzard coming.

Balter: Because they've told us that we're going to be locked in our houses for the next 10 days so people aren't that into the olives. They're just not going to last that long.

Radke: I will eat the bread crumbs if it gets to that.

Douglas: Or the farrow.

Radke: I'll eat the teabag if I need to!

Burbank: I'm trying to accentuate the positive with this, which is this – the greatest joy in life is when you want to cancel plans and then the other person cancels the plans first. I mean that's really why we're on this planet, for that moment. This is sort of like that experience spread out to a whole region. There's no social pressure to arrive at anything for the next few days. I mean, that's very liberating.

Balter: Forced housecleaning is what it's called because there's nothing else to do, but you've got all this energy and you're going to definitely clean things.

Douglas: And it's coming at the perfect time – on the eve of a weekend. So it might be as little disruptive as possible and you can stay in and enjoy the people you married.

Balter: That's what they're thinking over at the Mayor's Office where they've seen mayors undone by snow storms – 'Thank God this is a weekend' because it won't be as obvious.

Burbank: That was so drolly put in the Seattle Times. They talked about former mayor Greg Nichols' demise because he didn't want to use salt. Because that was considered environmentally unfriendly and they used sand instead. It did not get rid of the snow and ice, and he kind of lost his job over it maybe, and then they just mentioned casually, 'Seattle now salts the roads liberally.'

Radke: But you remember the worst thing that happened during the Greg Nichols thing was he was asked to give himself a grade on how he did the snow storm and he said a 'B'? And everyone was like, wait a minute, the only areas that were plowed was that street in front of your house and that other street in front of City Hall and downtown.

Douglas: That was the problem. I mean, it wasn't that the city wasn't quite prepared for the snowstorm, its that he was kind of out of touch with how badly it was going on the streets. If he had just gotten up and said, 'Hey listen, I get it, we're having a problem – here this is kind of a once in a generation storm, we're doing our best, I'm trying, give us a break, I'm going to be up all night in my office, I'm tracking this thing' — if he had just sort of given that vibe out, he would have actually skated through the snowstorm.

Balter: Do you remember the famous quote from I think the SDOT director at the time who was in Portland – not in Seattle – when none of this plowing was going on? She said, 'I don't drive a snowplow.' So you know that was like teed up for the mayor to basically fire her and he might have survived.

Douglas: Yeah. You want your SDOT director on the ground when it happens. But we forget that there was actually almost as bad a snowstorm under Mike McGinn. He sailed right through it.

Radke: This week's snowy Monday and then kind of icy Tuesday coincided. How was the basic grade for Mayor Durkan and the DOT?

Balter: Well, I wouldn't ask for a grade but I think that she benefited enormously from the fact that folks had just been spending three weeks trying to learn the beauty of working from home, and also taking more buses. So that part went well. I think the big test is the next 10 days basically, a week or 10 days.

Douglas: I think generally people feel like it was it was all right, it was not perfect. They get that we don't do this as well as Duluth, Minnesota, which is used to this like every day of the week. So I don't think this is at all hurting Durkan.

Balter: I have a newfound respect here for Seattleites in the snow. When I first moved here I used to laugh – I'm from Pittsburgh originally, learned to drive on hilly streets — but I used to laugh when Seattleites would drive I-90 as it would start snowing and they'd just park their cars in the middle of the road and walk. But you know, if you think about it, this is a really hilly city and and the temperatures – I'm quoting Cliff Mass, the Atmospheric Sciences guy – saying, 'Look, because we hover around 29, 30, 31 degrees, I mean this is this isn't really about snow as much as it's about ice.' And nobody wins in an ice storm.

Radke: Putting chains on your car is the new vaccination. Chaining my car doesn't help me if other people don't do it. It's herd immunity. Have you been trapped behind somebody, and you have your chains on, but the six cars ahead of you think that snow chains cause autism? So don't opt out. Don't do it, anti-chainer!

Douglas: I haven't been behind that guy, but I've been that guy.

Radke: You've been that guy?!

Burbank: I've been the guy with one chain on his car.

Burbank: I put chains on the front two tires of my Honda Accord and then at some point the right side chains flew off and I didn't know it. It was like a baby with one tooth, it had one thing that could grip and I was like, 'I'm only making left turns, Seattle! That's how I'm getting around.' I don't know, this was like ten years ago and it worked out.

Radke: If stores started rationing, because like stores that we just discussed – the shelves are empty – and you could only buy one item for the coming snowstorm, what's the one thing you buy?

Burbank: I mean I'd go with whiskey.

Burbank: I mean, it's a disinfectant.

Burbank: If do realize that you're not going to make it out, I mean it takes the edge off.

Burbank: Joni and I are going in very different directions. Joni's power cleaning her house, waking up with the coffee; I'm trying to make the world go away.

Radke: After much discussion with co-workers, I think bacon because it's protein, you can cook in the bacon fat, and the smell – as my colleague called it – is aroma therapy. Now you're feeling good in every way. But it probably should be flashlight batteries.

Produced for the web by Brie Ripley

This week we’re braving the elements and the news

This week’s news is an emergency